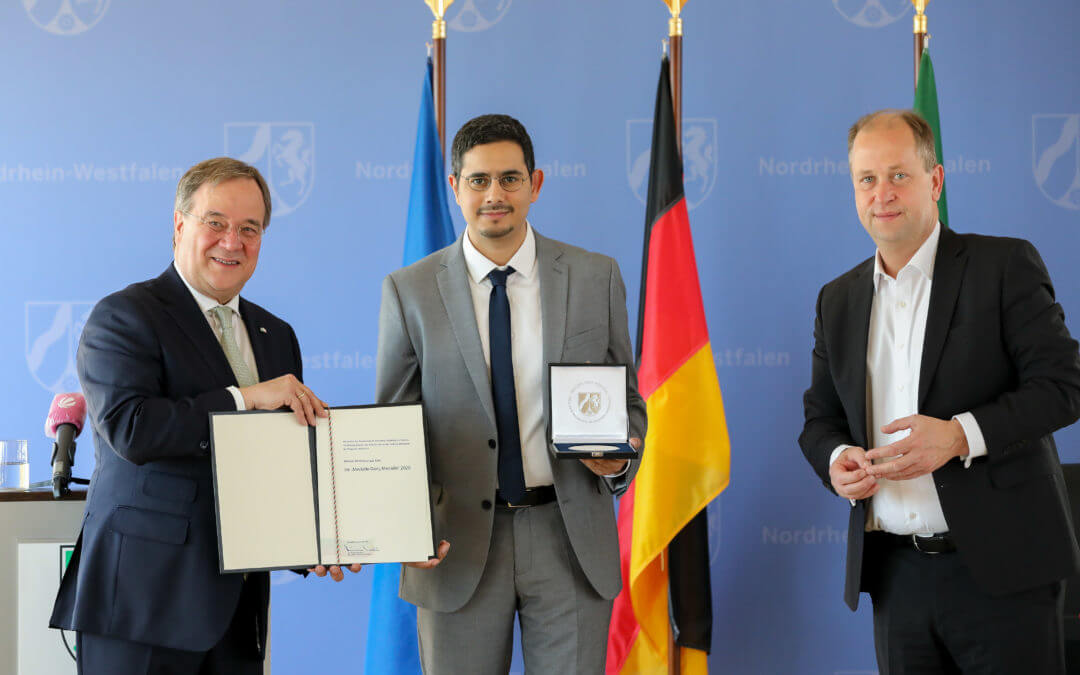 Great honour for Mimoun Berrissoun and 180 Grad Wende (180 degrees turn): The government of North Rhine-Westphalia has honoured Mimoun’s commitment against disorientation, radicalisation and crime with the Mevlüde Genç Medal. The award was handed over by NRW State Premier Armin Laschet on 28 May 2020 at the State Chancellery in Düsseldorf.

NRW State Premier Armin Laschet: „Mimoun Berrissoun achieves great things with his project „180 Grad Wende“: He makes biographical turns possible. With prevention and social work, he and his team give young people with disadvantaged backgrounds perspectives before they slide into extremism and crime. This network with many volunteers succeeds in giving young people orientation, developing confidence in their own abilities and building a personal future“.

Especially in times of physical distance this award is a special appreciation. It shows the importance of not losing social cohesion even in times of crisis marked by uncertainty.

In his speech, Mimoun found appropriate words for this need: „Togetherness and humanity are the most effective means by which we can face the virus of misanthropy. In this regard it differs from all other viruses – we know this from years of experience.“

180 degrees turn is committed to social work and prevention, focusing on the needs of young people through a variety of projects. Young people are given opportunities to enable them to bring about positive change in their lives and their environment with the intention to prevent the lack of prospects, radicalisation and crime. The initiative is supported by the Federal Ministry for Family Affairs within the framework of the Federal Programme „Demokratie Leben!“ and the State Ministry for Children, Family, Refugees and Integration of North Rhine-Westphalia and other supporters and partners. Mimoun Berrissoun and a broad network of committed volunteers throughout North Rhine-Westphalia aim to act as role models, mentors and mediators for young people.

Mevlüde Genç as a role model for tolerance, reconciliation and peaceful togetherness

The Mevlüde Genç Medal was awarded for the second time. It is named after Mevlüde Genç. She and her husband Durmuş Genç lost two daughters, two grandchildren and a niece when four young right-wing extremists threw incendiary devices into the house of the Genç family in Solingen in the night of 29 May 1993.

17 family members were injured, some of the injuries being life threatening, and are still suffering the consequences of this terrible attack.

The government of North Rhine-Westphalia donated the Mevlüde Genç Medal on 18 December 2018 for outstanding achievements regarding tolerance, reconciliation between cultures and the peaceful coexistence of religions. The first Mevlüde Genç Medal of the State of North Rhine-Westphalia was awarded to the Duisburg-based association „Jungs e.V.“ on 28 May 2019.